As a woman I firmly believe I can do ANYTHING!!! As a young girl I always dreamt I would travel the road less travelled by women. I remember in high school all the girls tried out to be cheerleaders, and majorettes and drama team. I was interested in ROTC, intrigued by the uniforms and the ability to learn to learn to twirl a gun. I happily was apart of that club for all four years of my high school career. Once I graduated I immediately signed up to serve my country. I chose the Navy because I have of love for the ocean and they had the best uniforms. LOL!!! I have always been into fashion…LOLOL!!! I was among the first division of women to be on integrated ships. It did not start as a joyful experience, especially with it being a male dominated environment. Yet, I persevered to be the best, earn my due respect as a soldier. I held true to the belief that I had the same abilities as the men. Many of our male counterparts made it no secret how they felt. “The military is no place for a woman.” Daily, some of us received verbal as well as physical sexual harassment which some were not strong enough to endure. You did not dare to file a complaint because they had the ability to make your life miserable. Believe me when I tell you on a DDG Class Destroyer, you were sure to run into that person many times a day.

These occurrences just made me stronger!!! In my pursuit for respect and acceptance, I used a “in your face” type of strategy. The “Bossy Gal” that I am, I started cross training to learn more skills. I passed trainings such as fire fighting, military police, and signalman. I enjoyed time spent with the gunners mates practicing my firearms training which lead me to become an expert shooter. It takes a “Bossy Gal” to endure training with the marines and not give up while the shoot live rounds over your head. To take charge of a major underway refueling when the guy in charge is sick in his rack.

I refused to be amongst the women who traded sex for acceptance and higher ranking positions. Notice, I did not say “respect”. It definitely was not a quality earned! As I became one of the “guys”, the names of those women were trashed beyond repair. The day I knew I finally earned my due respect and was valued as a fellow soldier was during our first steel beach picnic. I was initiated by being dressed in a safety harness that was tied to a rope line dunked into the ocean. I was not pulled up for what seemed like an eternity but actually just a couple of minutes. That day i earned the name “Kamikaze”, because of my willingness to step outside of myself and show my strength as a woman.

I shared this experience to show that we as women are strong and we can do anything. We are not sex objects and don’t have to give up our bodies to succeed in life. We are and we can be “Bossy Gals” if we choose to be. Stand strong and be confident this way our kids will be strong and confident…”Bossy Kids“. i honor women who share these same values. This is the reason why I decided to join #TeamBossyGals, a network of women with strong morals standards. I

I expect ALL of the women who follow me to join the movement…IF you’re bossy!!! 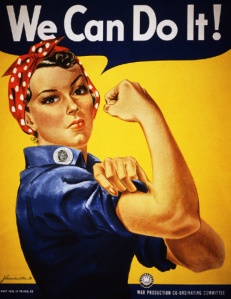 I am just what my blog says... I Live...Love...Share!!! I'm a Virtual Administrative Assistant, Writer and Social Media Marketer/ Manager. I spend most of my life online working, learning and meeting new people. View all posts by Lydia